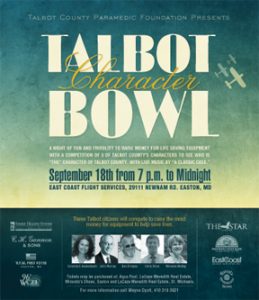 Talbot County paramedics will continue to have the latest state-of-the art equipment thanks to five Talbot County citizens and a fundraising program hosted by Talbot Paramedic Foundation celebrating its quarter century anniversary.

The five Talbot citizens who have stepped up to make this happen will vie for the title “Character of Talbot County” by raising funds to purchase the equipment include Chris Brian, Dan Bridges, Cornelia Heckenbach, Miranda McKay, and John Murray. Click on each “contestant’s” name for more information from each. Over the next few weeks, they will be appealing to their friends and acquaintances to contribute to purchase high tech cardiac monitor/defibrillators for Talbot’s paramedic units.

The monitors, called LifePak 15, electrically re-starts the heart as well as acting as a pacemaker monitoring the patient’s level of oxygen, carbon dioxide and monoxide. It can perform 12 lead EKGs automatically sending the reading to doctors at the hospital. Click here to learn more about the Life Pak15.

“The Life Pack 15 is the state of the art unit,” said Clay Stamp, Director of Emergency Services for Talbot County, “we turned to Talbot Paramedic Foundation for help raising the money to purchase them because of the county’s now very tight budget.”

“I think this is a great way to celebrate our 25th anniversary,” said Will Howard, president of Talbot Paramedic Foundation for 25 years, “those original 5 guys are heroes for what they started so many years ago. We want to salute them as well as the rest of paramedics who went through all the training to have undoubtedly saved hundreds of lives in this county.”

When five young men volunteered to provide Talbot County with the Upper Shore’s first paramedic service in 1985, Talbot Paramedic Foundation was formed to support them. Their goal then was to help purchase a vehicle and keep the paramedics supplied as well as to urge the County Council to fully fund them.

Now 25 years later it is the County’s largest department with 5 paramedic units strategically placed in service 24 hours a day.