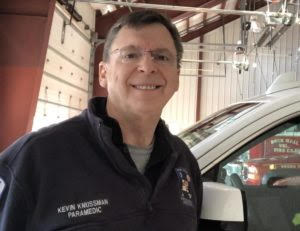 Talbot Paramedic Foundation board member Kevin Knussman was one of the original five Easton Volunteer Fire Department EMTs to become an Advanced Life Support (ALS) provider as part of a pilot program in 1985. Thirty-five years later he is finally pulling the plug on his nearly five decades of chasing emergencies and is the last of the original five Cardiac Rescue Technicians from the 1985 pilot ALS program working in EMS.

Knussman started in emergency services as a volunteer at the Denton Volunteer Fire Company.

He was only 14 years old in 1971, when he joined as a Cadet member and within a few years would be trained as a volunteer EMT and firefighter.

In 1976, Knussman was hired by the Maryland State Police as a cadet. He graduated from the MSP Academy as a trooper in 1978. After working at the Forestville and Easton Barracks, he was assigned to the Denton Detachment for a time.

In 1983, Knussman was transferred to MSP’s Aviation Division where he became a medic-observer and was certified as an Aviation Trauma Technician and was initially assigned to MSP’s medevac helicopter Trooper 2 at Andrews Air Force Base covering the Washington metro area and southern Maryland.

In 1985, he was selected to be part of the first crew assigned to establish Trooper 6, working out of a small office at the Easton airport. And in 1987, Knussman entered paramedic school at Essex Community College, and with three other troopers, became the first certified MSP flight paramedics.

After getting married in 1982, he moved to Easton and joined the Easton Volunteer Fire Department. In 1985, Knussman and a group of several other fire department volunteers worked with Maryland EMS officials and the local hospital to establish a pilot Advanced Life Support program.

For most of the first year, five Cardiac Rescue Technician volunteers provided ALS coverage 24 hours per day by taking a fire department vehicle home, or to work, responding directly to the emergency scene. Each of the five volunteers were recognized by Maryland’s state EMS agency and the Talbot County Council for establishing a successful and life-saving program.

There was great difficulty in establishing a newly created organization and obtaining adequate funding with which to operate was also a challenge. Eventually though, with community support, funding was provided, and ALS providers began responding to emergencies throughout Talbot County. Soon other county-operated ALS programs were created to serve the four other surrounding Eastern Shore counties.

Knussman retired from the Maryland State Police in 1999. He soon began working for Caroline County as a paramedic and in 2018 was hired by the Kent County (Maryland) Office of Emergency Services, also as a paramedic.

He has spent the last several years on the Board of Directors for the Talbot County Paramedic Foundation continuing to pursue state of the art emergency medical services in Talbot County (and to the entire region) and to have EMS providers viewed as vital professionals with a salary and benefits enabling them to participate in EMS as a lifelong career.

The Talbot Paramedic Foundation’s mission is to support Talbot County government in providing the best EMS training and equipment possible. Recently Talbot Paramedic Foundation established a scholarship program to support EMS providers in their educational efforts. The Foundation has also conducted a fund drive which will enable the replacement of outdated community access defibrillators, among other ongoing projects.

“Kevin Knussman has long supported efforts to establish professional career EMS services in Talbot County. His voice has been there every step of the way and his vision of EMS providers working for a county department and accountable to county elected leaders was realized,” stated Wayne Dyott, President of the Talbot County Paramedic Foundation.

“I started riding in a Cadillac ambulance with minimal training and equipment and was able to participate in revolutionary change in how emergency medical care is being provided to citizens in this region. Creating change was not easy and was only made possible with the support of so many people once they became aware of the importance of an immediate response to every emergency. It

has truly been an incredibly satisfying ride. I leave several hundred paramedics and EMTs well educated, trained, and equipped to take my place!” stated Knussman.