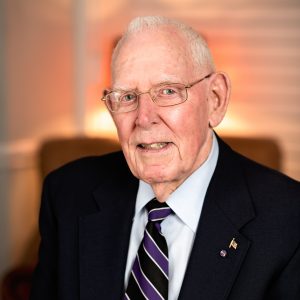 General Andy Anderson was born and raised in New York City. He completed a military career covering four decades, from enlistment in the State Guard at 16 during World War II, to commissioning as a National Guard officer in 1951 and entering active duty during the Korean Conflict, to being a severely wounded mechanized infantry battalion commander during the Vietnam War, to retiring as a major general in 1986. His final assignments were as Deputy Commanding General of VII Corps in Europe, and Commanding General of the U.S. Army Test and Evaluation Command and Aberdeen Proving Ground, Maryland. He earned a B. A. degree from Park University in Missouri, an M.S. degree from George Washington University, and is a graduate of the U.S. Army War College. He has been awarded the George Washington Honor Medal for individual achievement by the Freedom Foundation of Valley Forge, Pennsylvania. He was an elected member of the Talbot County Council from 1990 to 1998, ending this period as its vice president, and was also on the board of the Talbot County Arts Council and liaison to the newly established Talbot County Paramedic Foundation and has continued to serve as a Board Member. He was again a member of the board of the Talbot County Arts Council from 2001 through 2014, culminating this service as president and election as president emeritus. His other civic activities include continuing service as a governor appointed commissioner of the Maryland Veterans Home at Charlotte Hall since 1988, president emeritus of the Upper Eastern Shore Chapter of the Military Officers Association of America, photography chairman of the Waterfowl Festival. He is a Veteran’s advocate and holds life membership with numerous Veteran organizations including the Military Order of the Purple Heart in which he served as charter chapter and Maryland department commander.